If you are interested in International Harvester history, become a member and share the joys of this fine organization.

After the roundup, we made our final mortgage payment so the International Harvester Museum in Millville is now fully owned by IHC Chapter 17.

After a very long wait, chapter 17 was finally elected to host the 2019 Red Power Round Up. Having bid on the show in 2016, we had three years to organize this massive show.

To be a host of the National Red Power Round Up, the members across the country vote on location. After numerous unsuccessful attempts, we decided to do a show for the eastern members. The 2014 national show was in South Dakota. We took advantage of that and had the Red Power Showdown one week prior.

Off to the fairgrounds in Bloomsburg again, we hosted another great show, the Red Power Showdown. With the support of IH eastern chapters, it was a great success and a lot of fun.

It seemed to take a long time to get everything accomplished but finally in the summer of 2010, we took possession of the Bartlow Family IH dealership building in Millville, Pennsylvania

Later in 2007, the club was approached by Frank Bartlow (Tubby) and asked if we were interested in purchasing their family IH dealership building in Millville, Pennsylvania. After much discussion we voted to check into this large purchase. It took a lot of time to get everything that was needed accomplished.

After hosting the Red Power Round Up in 2003, we knew the second would be much easier.  The 2nd Round Up was held on June 26-28, 2007 at the Bloomsburg Fairgrounds. It is quite an honor to be chosen to host the Round Up and also a big obligation when considering all the man hours, expenses and the dedication of members.

With over $10,000 dollars in the treasury, the members decided we should do a Red Power Round Up here in central Pennsylvania. After much planning and decision making, the club held its first Red Power Round Up at the Bloomsburg Fairgrounds on June 26-28.

At the next membership meeting one of the members stood up and said, “That was fun! Let’s do it again.” Immediately, there was a motion on the floor to do another Roundup; the vote was unanimous!

As the years went by, we started earning money through fundraisers and raffles.

Our membership continued to grow to well over a hundred members.

The club addressed the national board to become a chapter at the 1994 Red Power Round Up held in Hookstown, PA.  On September 17, 1994, Chapter 17 was born.

The club was organized in September of 1993 with 60 members. 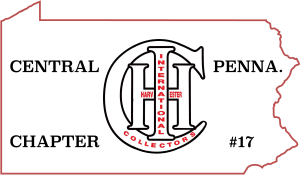